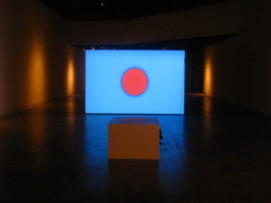 Most people associate data with spreadsheets and charts.
But the latest exhibit at Artisphere, “Data/Fields: 5 New Media Installation Works,” challenges data’s unexciting reputation.
“I wanted to have an idea that could flow through all of these pieces,” said Richard Chartier, a Washington-based sound artist and the show’s curator. “Data is all around us.”

Works by five international artists are featured in the exhibit, which runs until Nov. 27. The pieces range from sound installations to sculptural video, and explore how people perceive, process and understand information. The works engage the senses by manipulating color, light and sound.
“It’s really a well-rounded exhibit for this kind of work,” said France Jobin, a sound and installation artist from Montreal whose work is included in “Data/Fields.”

Visitors are asked to look at, listen to and even touch the art. “Everyone’s going to have a different experience with these works,” Chartier said.
For instance, viewers can interpret Caleb Coppock’s “Graphite Sequencer” multiple ways. The work consists of several paper circles decorated with graphite line drawings, which hang in rows behind a turntable along the gallery wall. Participants can select one of the paper circles and place it on the turntable, which houses a tone generator. Because graphite conducts electricity, visitors can turn the line drawings into sound-conductors and literally listen to the art.
“We are in the process of understanding the way in which we are coming to see the world,” said Andy Graydon, a Berlin-based artist featured in “Data/Fields,” during a Skype interview with Patch this week.

Chartier originally conceived the show four years ago for the University of Maryland. After two years of work, the project was abandoned as a result of university budget cuts. Two years later, Chartier has finally executed an exhibit that actively explores data and how people process information.
“Data/Fields” is a departure from the average spreadsheet.