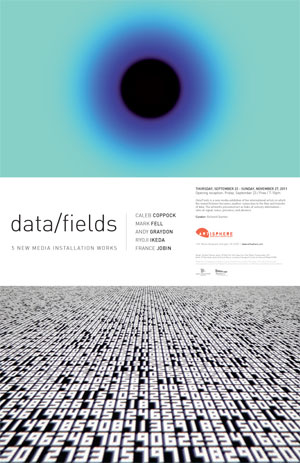 Those readers on the part of a continent that involves something called “Arlington, Virginia” should be interested to hear about an exhibition of new-media installation and soundworks that opened last week at Artisphere and will be on display through November 27th. For those readers geographically dispossessed, this announcement can at least serve as an introduction to the work of those involved. Curated by the renowned composer, designer, and LINE imprint boss, Richard Chartier, the show collates new work by five transcontinental artists:

Originally conceived to take place four years ago at The University of Maryland, in the art department where my mother and father were to meet and fall in love, the project was waylaid by the turbulence of departmental budget cuts and postponements before production was finally halted. The show in its current incarnation should then be considered as a condensation and streamlining of Chartier’s original vision. The first presentation of any of the included artist’s work in the DC area, the show marks as well the first US exhibit for both Mark Fell and France Jobin.

Straightforwardly a foray into the now familiar tropes of interactivity and data visualization/sonicization in the arts (have the arts ever been anything other than dataviz? Ah, but that’s for a whole other post…), the show is of course not only that. With it’s investigations into the themes of transfinite mathematics, the perception of quanta, and incomprehensibility, the show remains keenly attuned to the sense of the body and percipience of the viewer. (Chartier charmingly describes the viewers of the show ‘percipients’.) In an interview about the opening, Chartier mentioned that it was the longest he had experienced viewers interacting with artworks at a show he had seen in the US; a good sign for those of us who bemoan the meat-packing pace of exhibition viewership today!

As is often the case with my interactions with art, the thematic of the observer stilled before incomprehensible magnitude takes me back to the perennially rehashed 2,400 year old question regarding the banishment of the mimetic arts from Plato’s Republic. For Plato the exclusion would have been a question of art’s capacity to besiege its witnesses with a sense of θεíος ϕοβóς. Construing a quick trinity, it’s a concept taken up in an in-depth, Continent.-friendly tenor by Rancière in his recent work on Hegel and Lyotard. (See The Future of the Image, Verso, 2007). Even more recently, for the art historian Donald Preziosi, this a/effect, translated variously as holy terror, fear, or awe, is named as such because it is directly proportional to the work’s ability to reveal the artifice intrinsic to art and by extension the artificiality of all sociopolitical and religious modes of organization. (See Preziosi’s forthcoming Routledge title, Art, Religion & Amnesia: Enchanted Credulities.) Not good news for those with vested interests in maintaining modes of organization as they stand!

With its exfoliations, redressings, and retunings of our data and sensoria, dependent as they are upon relatively recent developments within the technoaesthetic apparatus (gigabytes of processing RAM, LCD projectors, and touchscreen interfaces), I’ll be curious to hear from those who make it to data/fields the extent to which it manages to unearth this ancient, but by no means archaic, line of thought. As Paul touched upon in his recent post on The Shifting Imago of Sovereignty the high-speed, transactional nature of data would seem to occupy a unique place in it’s ability to leave us beset by the stupor of fear and trembling.