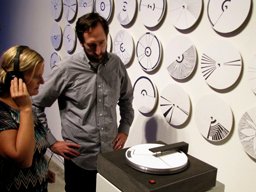 Data/Fields: What You See Is What You Hear
by Steve Thurston
September 30, 2011

By: Steve Thurston, Mercury Editor
I hit the opening of Data/Fields at the Artisphere in Rosslyn on Friday, Sept. 23; I’m not totally sure what I was looking at, but it was fun just the same.  It’s the sort of show that people stayed to gawk over, and strangers talked with each other about what they saw, said curator Richard Chartier, and that was my experience as well.

Viewers just couldn’t help talking to one another at Ryoji Ikeda’s “data.scan.” We stared at a screen that looked just a bit like the old Pac-Man console screen (the ones you sit down to play, back in the day). A series of lines and dots scrolled over it. Three distinct types of screens developed, one looked like static, the other like empty space with red cross hairs shifting through. The final one looked like a video transcription of radio signals or something similar.
At the same time, the background sound that seemed random “ping”-ed every now and then, and those pings, we realized, announced that data had been organized or arranged in some way on the screen. It’s about then that someone looked down at the moving crosshairs and said that the ping comes when the crosshairs find a star, Alpha Centauri, for instance. It’s the heavens. That static, said someone else bent close to the monitor, is a string of numbers, tiny numbers. It’s mapping the heavens.

“This would be the coolest coffee table ever,” one man said.

Chartier told me in a phone interview after the event that Ikeda does not give interviews or talk publicly about his work, but that he is known for seeing data everywhere. Everything can be measured and turned into data, and by choosing the heavens, that sense of infinity increases.
“It’s almost like the work is about incomprehensibility. You can’t put your head around it,” Chartier said.
In another part of the cavernous room, where white noise and the occasional ping can be heard, people gathered around Caleb Coppock’s “Graphite Sequencer.”The modified turntable picks up electric signals from pencil lines drawn on heavy-stock paper. The graphite in pencil “lead” conducts electricity and sends the signals to the headphones.

“Percipients,” as Chartier calls the people who come to the installation, look at the disks hanging on the wall, think about what each might sound like, put a disk on the turntable and don the headphones to hear burps, buzzes, rasps and zzzzzzzzz-es in various patterns.
by Steve Thurston
September 30, 2011