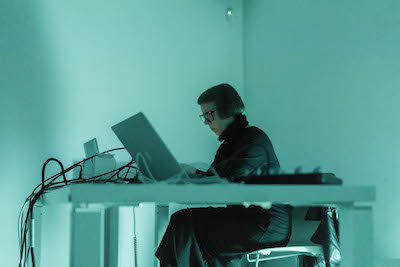 France Jobin will present  a four-channel sound installation and live performance on October 28th 2016 for the closing of Haunted Formalism.

This event marks the closing of Haunted Formalism, which true to its exploration of ambivalence and in-betweenness itself adopts two interrelated, concurrent forms. An exhibition of new works by Nicole Phungrasamee Fein and Dean Smith establishes the thematic concerns that inform an ongoing program of live, limited-capacity events, creating an open-ended dialogue between disparate practices that evolves through experiences intended for a small audience.

Yet these dialogues themselves arise from tensions within the artists’ works. Among the most fundamental takes place between art and science; Smith’s drawings in graphite, we argue, can be interpreted in terms of the relational properties of the carbon atoms that compose his medium, while Fein’s compositions, which evoke supernovae and cell-culture dishes, recall the simultaneous coexistence of two states possible in the quantum realm.

France Jobin makes work that emerges from the proposition of an unlikely parallel between quantum mechanics and composing. Just as Heisenberg discovered that scientific precision encounters a limit past a certain scale, so too does the composer stand in an uncertain relationship to the feelings and emotional states that inform his or her work, necessarily falling short of full knowledge. The conundrum is doubled with respect to the listener, for whom the sounds at hand may well have been processed past the point of recognizability, obscuring yet still indicating their material source.

This evening will comprise a four-channel sound installation and a live performance. Tickets are $18, and capacity is limited.