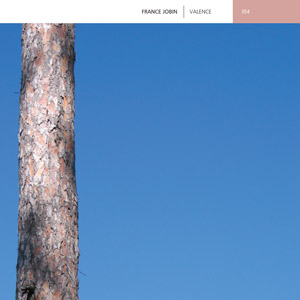 A rather small, independent record store in Cambridge, MA (such places still exist), it contains one of the, well, weirdest selections I’ve ever seen. If you are seeking something off the beaten path, it’s absolutely fantastic. The pricing is good, shipping cheap, and at the end of the day it felt great to support both some lesser-known artists as well as a bona fide record store.

One of my recent purchases from this most excellent establishment was France Jobin‘s CD, Valence. A Montreal-based artist, Jobin (b. 1958) has created solo recordings for a number of labels and has also produced installations around the world. Her work is mostly electroacoustic in nature, exploring sounds at an unhurried pace. If this CD is any indication of her work as a whole, I would be quite anxious to hear some of her installations.

The title for the CD, Valence, is inspired by the valence bond and molecular orbital theories of atomic particles. If you harken back to high school chemistry, you may recall that the electrons around the nucleus of an atom do not follow planet-like orbits (despite what the logo from The Big Band Theory might imply), but rather exist in particular regions around the nucleus. The tracks are thus appropriately titled S orbital, P orbital, and D orbital.

The CD opens with sounds that lie on the edges of human hearing, demanding a high-quality listening environment to enjoy the full effect. As the 27-minute track progresses, a swath of warm, lush tones, which might be more commonly found  as backdrops to a tranquil video game, emerge. S orbital is anything but passive music, however, as the interaction of this warmth with other sounds at extreme frequencies and occasional, less-musical sounds, creates a complex listening space worth exploring. I only wish I could experience this is a concert hall with as many surround channels as possible.

P orbital takes a noticeably different path from S, as it opens with a single note struck repeatedly, and slowly, on a piano. The sounds, while still primarily warm and consonant, are also more aggressive both in their sweeping volume and slight metallic tinge. In this track, Jobin really demonstrates her remarkable sense of pacing and development. Approximately seven minutes in to this 22-minute track, the opening figures are reduced to a single tone while lower frequences take the piece in a decidedly more sinister direction. Later, a major chord slowly and unexpectedly emerges, and, to provide stunning closure, the piano note returns at the very end. It can be difficult to maintain interest over time with relatively few sounds, but with these opening two tracks Jobin demonstrates both a capacity for sustained intrigue and remarkable adeptness at transitioning to new ideas.

The final track, D orbital, seems to combine aspects of both S and P. The warmth of the opening track and some of its high-pitched tones return, and the slowly emerging harmonies seem connected to the second. As I hear it, these three tracks are intimately connected, but at the same time I would be quite hesitant to impose some sort of three-movement form on the disc. D orbital may be a continuation of similar ideas, but it is not a summary.

In the end, I think this is a magnificent CD, worthy of your time, attention, and purchasing power. As a caveat, though, I think a 30- or even 90-second preview of this album will not do it justice (especially in an inferior listening situation). At a glance, one might write this music off as ambient fluff, but deeper listening reveals a subtle complexity that is immensely satisfying.