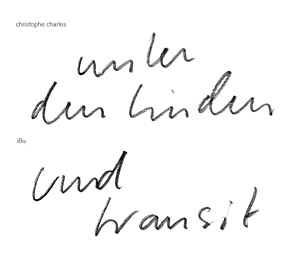 This is one of nonvisualobjects’ three new releases, all of which are collaborations, or split eps, by two artists. Here we have the latest by both Marseille’s Christophe Charles and Canadian sound sculptor i8u respectively. Starting with Charles’ Unter den Linden, a wonderfully atmospheric 30-minute composition which was performed in concert at SND Studios (UK) in early 2009. By using the sounds of wind — and of flying things like planes and birds — the skies are heralded. The above and beyond sounds pay homage to his recently deceased father, Daniel Charles. There’s something of a spirited rumble, though this is quite low-flying and vibratory. A transitional piece that lulls and suspends throughout, like a haunting reminder, or a flickering light at the end of a dark cavernous space that you gravitate towards curiously. Once through you are out on a bustling street, walking through the din of the city. Worlds slowly collide, politely shifting as an ascending craft swallows the scene, leaving behind a semblance of trickling water and whisper.

On Und Transit i8u (France Jobin) paints a restrained world with sine waves by bending elegant sounds, paired with the echoey hollows of a passageway in Lower Austria. During an art residency she found a certain inspiration in the Minoritenplatz, a long corridor towards her studio. Within these sounds of emptiness Jobin recorded a certain reverberation here, a path that shuttles you in secret. The five pieces that comprise the recording are a collection of manipulated field recordings in and around the city of Krems known for its eye-popping riverscapes and historical architecture. Unlike most North American cities contemporary art is integral to the social structure of daily life here. i8u helps draw from daily walks through the city in what may be better described as a micro-encoded mapping of her meanderings. It is on Donnerstag that this becomes most evident on this very elusive work. It lifts gently, opens with an airy drone, rises and glides away.