France Jobin and Markus Heckmann will present Entanglement AV and XR as well as take part in a panel about XR production during Mutek Japan which will take place between Dec 7 – 11th 2022.

Both prolific artists with a focus on audiovisual environments, new technologies and modular components, France Jobin and Richard Chartier met at MUTEK Montréal in 2000 and went on to form a collaborative friendship and professional kinship. The sounds of everyday life become sculptural and enveloping in the multidisciplinary work of award-winning artist, composer and curator France Jobin. Since the mid-’90s, she’s crafted meticulous compositions that merge analog rumblings with digital precision, modular with field recordings, musical with visual. Applying a minimalist approach to her site-specific sound environments, she creates installations and performances inspired by the architecture of physical spaces, deeply immersing listeners in subtly textured variations, often inducing physical effects that go beyond the ear.

Alongside his visual art practice, Richard Chartier has produced multiple minimal electronic pieces, exploring the interrelations between the natural spatiality of sound, silence, focus, perception and the art of listening itself. He’s collaborated with composer William Basinski, sound artists ELEH, CoH, Matmos, German electronic music pioneer Asmus Tietchens and many more sound and multimedia artists. Chartierʼs sound works/installations have been presented in museums, galleries and performance contexts all over the world.

After the release of DUO on mAtter label, Jobin and Chartier created an exhibition of prints based on the concept, re.DUO, held in February at Tokyo’s gift_lab GARAGE gallery. Jobin and Chartier premiere DUO‘s first-ever live performance at MUTEK, combining sound with seamless live visuals by artist Markus Heckmann to create a wholly immersive and spatially dynamic atmosphere.

Appears as part of Amplify.
Amplify is led by the British Council, MUTEK and Somerset House Studios, with the support of Canada Council for the Arts. 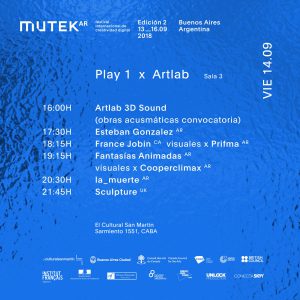 The depths of Montréal’s sound-art spectrum submerge all who enter the exemplary PLAY 1, where radical experimenters astound with enchanted circuitry, found sounds and feedback, rendering music sensually physical in the bold strokes of live painting, contemporary dance and large-screen abstractions.

France Jobin will present the world premiere of  ”sans repères“. Created entirely with actual field recordings gathered while on tour in Japan, “sans repères” explores the possibilities brought forth in the absence of absolute points of reference. 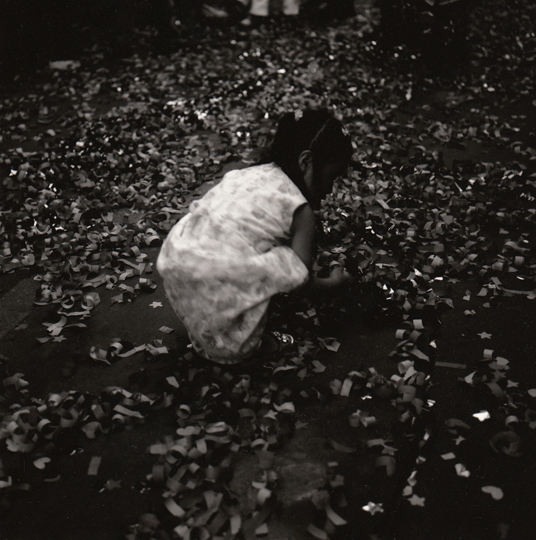 Thursday I caught A/Visions II with The Fun Years, Jaki Liebezeit & Burnt Friedman as well as a portion of Martin Tétreault & Michel Langevin. Tight overall, filled with abstract percussion, broken beats ala world rhythms. Tétreault dazzled with a multi-bank of turntables while Liebezeit and Friedman have honed a balanced blend between their disparate world of Krautrock meets dub/jazz.

Later in the evening I spent a majority of my deep listening time dedicated to the goings-on at the Savoy (within the Metropolis complex where it was a blend of dub and dance music for party people). I managed to eavesdrop on a touch of both Moderat (a loud crowd-pleaser of techno ala rave pairing Apparat and Modeselektor) and DJ Mala whose intriguing rhythmic flow could have had the crowd on its feet ’til the wee hours. I focused on the more dense and diverse smaller room, however its proximity to the larger had caused for an aural spillover that was distracting at times when the artists performing were headed for deeper bass lows. That said, all were in top form including Anticipate’s Ezekiel Honig whose funky set had a wash of minimal, calculated harmonies layered together like a treasure map. Clinker of Alberta was the evening’s biggest risk-taker, evolving a commissioned Leonard Cohen piece with voice (digital and live), smoke machines and video. He crossed austere religious references with passionate sexuality in an emotional set that was imbued with a certain sense of longing. i8u along with video artist Chika (doing double duty w/Honig earlier) performed a pert 40-minute long set that was simply perfection. The unique culmination between the most minimal acoustics with beats that teased but never fully prompted a pop sensibility. There was something sensual yet very cryptic in this stand-out set of the showcase. Grecian artist Novi_sad’s part of the evening began off the main stage and behind the audience (”chill out” floor area) sans visuals. It was darkly experimental, full with lush drones and lost voices, sound effects and strange field recordings. His set ran longer, but I could’ve gone all night with him. Finally Montreal’s Aun took the stage, making for a continuation of the previous set, but perhaps a touch more ambient…though sleep beckoned and I left about half-way through all was well into the night.

presented by 33mag (more below)

In today’s connected world we have many new methods of collaborating,
and many technical and artistic problems that arise in the process.

These two artists bring this chasm into focus and explore the
possibilities given by these constraints.

This project intersects i8u’s minimal yet powerful sound sculptures and
CHiKA’s geometric minimalist patterns to create a work that expresses
the examination and limitations of itself.

France Jobin aka i8u is a sound/installation/web artist whose work has been released on ROOM40 (AUS), nvo (AU) and recently, a collaboration with Tomas Phillips on ATAK (JP). She has worked with Goem, Martin Tétreault and David Kristian.
http://www.i8u.com

CHiKA is a live media artist working in the international VJ and experimental music scene. Her performances vary from minimalist geometric patterns to unique compositions overflowing with a variety of forms and color.
http://www.imagima.com

The many factions of dub converge onto one large stage to showcase just how far Jamaica’s roots reggae templates have evolved toward new genres in the hands of some of today’s hottest names.

None other than Skull Disco co-founder APPLEBLIM comes to Montreal for his Canadian debut and a DJ set that showcases the many point sof fusion between UK dubstep and Berlin techno. A seamless blend of echoes, bass, and delays leads us to the heavily anticipated collaboration between Canadian dub-don DEADBEAT and Berlin’s master vocalist of all things dub, PAUL ST. HILAIRE . The collaboration is something of a natural selection for MUTEK, given Deadbeat’s longstanding participation with MUTEK, and the fact that St. Hilaire has also performed at MUTEK events several times over the decade.

Next up, MODESELEKTOR and APPARAT join forces for the Canadian premiere of MODERAT , a stunning live audio-visual production accompanied by the striking video work of PFADFINDEREI . Again, MUTEK has a long history with both acts, as Apparat first appeared here in 2005 and Modeselektor performed here in 2006 and 2008.

And finally, the night winds to a tailspin with the breakneck dubstep assault of the Digital Mystiks’ MALA , in town for a Canadian debut DJ set.

Placard is a headphone concert festival, playing with concentration, intimacy,time warp,and teleportation.This year it goes on for 97 days non stop, in different cities. It functions under a mode of open program,open for headphone rooms to create performance spaces where performers are welcomed to perform. Both the headphoneroom ‘owner’ and the performers use the inscription site to self organize the global program. The placard ‘owner’ receives in his room performers who have submitted a inscription via the site , and streams the shows to the other headphonerooms either passive listeners or waiting to perform.The site is designed to simplify communication inbetween the performers and the organizers, using automatic emails notifying of incomming inscriptions , accepted deplaced or refused perfomances ; also notifying performers of the creation of headphonerooms in their city.

The ring has grown , last year quite a few new cities got involved ;( helsinki , stralsund , benicassim .. (link to last year’s archive) ) .This year has allready started with a few prologues (maybe a preview of what might be one day a non stop placard network) – one in berlin during club transmediale – one in bratislava – and one in bologna -(see pictures and line-ups here) The official placard festival opening will be in montreal for the mutek festival and then move on.

i8u’s audio is inspired by the concept of string theory; 10-33 cm being the theoretical size of the strings that makes up the universe. Resonance is the vibrational pattern, which determines what kind of particle the string is. The type of particle is the movement of the string and the energy associated with this movement.
The soundscapes created mirror our limited understanding and imagination of these strings as they slip in and out of the dimensions we are aware of.

For the remainder of the night it was over to the cavernous Metropolis for a split venue/themed presentation. In the larger room were mostly the dance music, in the smaller space more experimental and quieter or quirky offerings. I tended to spend most of the earlier part of the evening alongside LA curator Robert Crouch watching the mostly female driven evening of music by the wash of heady and physical, cyclical and sensory sounds of I8U, the soft tweaky dissonance and ambient layers of Sawako and my first exposure to the vivacious Bubblyfish doing 8-bit renditions of Kraftwerk songs. The whole intimate space was filled to the gills with an audience craving a very contained experience. This all started with a helmet scream gaming match where two players stood side by side in a race that used their voices to drive motor vehicles. Noisey and fun.

For the occasion of the very promising NOCTURNE 3 showcase, the Metropolis will host a massive two-room event to kick-start the weekend.

In the main room, several of today’s best producers bring new band projects to the stage for an energetic showcase designed to celebrate the organic side of dance music. Hotly tipped Swiss producer Kalabrese and his Rumpelorchestra bring an innovative mix of techno and funk, while superstar DJ/producer Matthew Dear previews material from his new electronic pop album with his three-piece band, Big Hands. Montreal’s The Mole keeps the evening rolling with his infectious brand of disco-soul, before joining forces mid-set with the inimitable Cobblestone Jazz (Vancouver), a three-man electronic jam band led by none of other than Mathew Jonson.

Meanwhile, over in the Savoy Lounge, six experimental electronic musicians and two visual artists from Japan, New York, Paris, and Montreal will build a strange and fanciful soundtrack for the curious: O.Blaat, Sawako, Chika, Bubblyfish, Glomag, Decrepticon, Mec and i8u.