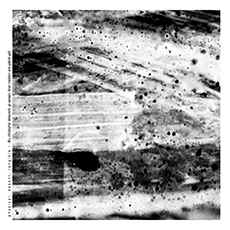 A compilation of tracks with the theme of past spaces, memories and time. 4 acts showcase their own take on this subject. There were sound-art and music meet. It doesn’t happen very often that we receive compilations here at EARLabs. This is easy to explain because in most cases compilations are not really are not really a cohesion of tracks, though on the other hand if done well they can say a lot about the label and the involved musicians. In the last category is the collection of 12 tracks that are brought together on Physical, Absent, Tangible on the label run by Richard Garet: Contour Editions. The four acts involved are i8u, Christopher Delaurenti, Gil Sansón and collaboration between Brian Mackern & Gabriel Galli.

Physical, Absent, Tangible gives a clear idea about what Contour Editions stands for. The musical pieces we find here are in the musical outsiders field of sound-art. The artists all approached the sound world here with an inspiration of gone spaces. Gaps in space and time.

The first piece is Rarefraction by i8u. A minimal piece with low sine drones and high pitched beeps. At least that’s how it starts. Gradually the piece transfers into some sort of big emptiness, while the high pitched sounds re-occur through out the whole piece the main part seems to be more ambient drone based. Soft soundscapes set a scenery of a huge empty space, while the high pitches seem more like a proof of organic happenings. As if something is trying to find its way. While at points the high pitches can sound a bit annoying still overall this is a strong piece. It is one with a lot to discover.
The next artist up is Christopher Delaurenti. His approach is from another angle. He presents two different pieces. The first, Sigil, is one based on distorted and clipping low-end noise and feedback. In the piece there are returning cycles. The soundstructures are suitable for a live setting where a surround system is used to let the music spin through the room. The different pulses could blow the audience away. For cd, though, it is a less interesting piece. It stays a bit on the same side of things.

The second piece by Delaurenti is from another level. This is much more for the home listening session. Nictating works with several layered loops. The background is filled with pulsating noise while more to the foreground clicks are slowly evolving through time. The continuous adding and removing of loops makes this an interesting piece. There is a slow transgression in the music that makes it surrounding throughout the complete room. While some of the loops keep on returning the music never becomes boring.
Next up is Gil Sansón, who delivered 8 pieces by the same name La Montaña S Ha Ido. The source for this pieces are field recordings and archived sounds which Sansón had made in the past but forgot where they came from. With these he tried to recreate situations that could have been the original setting. Throughout these pieces there doesn’t seem to be a line to connect them soundwise. Some of the pieces are more drone based, while others hang in the musique concrete side of music. Due to the way Sansón worked the pieces stay a lot on the sketch side, leaving a feeling that it could have been a bit more.

The last act is the duo Brian Mackern & Gabriel Galli. They present a 14 minutes long piece called 34S56W/Temporal De Santa Rosa. The piece is based on radiomagnetic interferences that were generated dring the De Santa Rosa storm in Urugruay. They made use of radio receivers, circuit-bended apparatus and much more. The piece knows a certain progression from pure radiostatics to a rich layered structure of drones, noise and hiss, but honest enough it also shows the most “musical” sides of all pieces presented here. The duo makes use of certain melodic elements which we do not find in any of the other tracks. Besides that the development shows a lot of exciting things with both gradual and abrupt changes taking place. Due to the used instrumentation the sound is quite lo-fi. But, in this case it really adds to the character of the music. It easily fits in with the tape sounds done by Norwegian duo Bjerga/Iversen. A great composition to finish this compilation with.

Physical, Absent, Tangible is a good compilation which promises more interesting things to come from Contour Editions. Though, it is more than just a sampler, it is a nice collection with a strict theme interpreted from different sides. Recommended to check out.

Contour Editions is a new label curated by New York based sound artist Richard Garet, whose tense grey drones had marked his very impressive Four Malleable 2cd set on And/OAR as well as an exceptional collaboration with Brendan Murray released back in 2009. The same technical rigor that Garet employs in his own compositions extends to this compilation of various artists working around the globe, including i8u (Canada), Christopher DeLaurenti (Seattle), Gil Sanson (Venezuela), and Brian Mackern & Gabriel Galli (Uruguay). Aside from DeLaurenti, whose phonography collection of orchestral intermissions has long been a favorite of ours, this compilation is an introduction to all of the artists present. Not a bad thing at all, considering how strong each contribution is. Garet had charged these sound artists to consider the “evocation of the in-between immaterial spaces” – not quite the existential pursuit into nothingness, silence, or the void; but rather, the faintest of sounds brought close to the event horizon, the ghosts that tickle at the edge of perception, etc. Fortunately, none of the artists employ the clicks and cuts techniques which emerged from the Max/MSP crowd from the nascent days of the millennium. Sure, things are quiet and undoubtedly processed and/or produced by digital means.

i8u is the work of Canadian composer France Jobin, who’s actually been around quite a while, producing all sorts of electronica-laced computer-driven compositions. Her track eschews all of the mid-range frequencies, instead splitting her attention between a deep rumbling low-end of a slightest pierced tones at the high-end. Despite the extremes of tonality, there’s something rather lulling and enveloping about this piece almost achieving the same generative stasis that Thomas Koner produces. Christopher DeLaurenti presents two tracks of stone-faced slabs of grey noises looped and snapped into a darkened ambience. Gil Sanson’s eight vignettes are open ended by design, with the composer encouraging the listener to hit shuffle on the cd player. These buzzes, drones, and smeared field recordings connect through a muted aesthetic of dreamy discomfort. The Mackern & Galli piece bristles with electrical static cracked upon a shortwave radio with Morse code blips streaming into the foreground and peculiar gestures of feedback sneaking throughout. Bits of radio transmission break through these disembodied elements, giving the piece the detached aesthetic which was endemic to The Conet Project and The Ghost Orchid, despite the very-hands on approach to this piece. All together, the album seamlessly flows from one track to the other, almost making it difficult to discern where one composition begins and another ends.

Hopefully, one of many good things to come from Mr. Garet’s label. Oh yes, it’s limited to 150 copies, too!

Good news: Richard Garet has started his own label, Contour Editions, and the first release is a compilation of five artists, once again–as has been the case quite often recently–all new to me.

OK, anyone who knows me knows how short my patience is for noms and can imagine what it took for me to get past a piece from someone going by the moniker, i8u (count to ten, Brian) but damn if this isn’t a wonderful work. She (France Jobin) has been around for a while, actually, I’ve simply never encountered her that I can recall. “Rarefaction” is a drone piece but one containing exceptional warmth and wit. After several minutes, she introduces this luscious seesaw between a soft high hum and a super-low loud one, the relationship between the pitches sounding oddly familiar as though extracted and mutated from some pop standard. Very nice. Christopher Delaurent’s two works are darker, airy rumbles spiced with poppage, that convey a fine, slate-like texture. Not bad, though maybe a bit similar to much other music in this area.

Gil Sansón presents a suite of eight shortish pieces that mix field recordings with electronics, some of which are very lovely on their own while others drift a bit aimlessly. Their relatedness, as well (perhaps intentionally) seems tenuous, though they’re the kind of work that I feel I’d enjoy far, far more in situ, in a sizable room, rather than over speakers. The final track, by Brian Mackern and Gabriel Galli closes the disc out in excellent fashion. 14 minutes of Morse Code-infused, gritty hum, whine, whistle and assorted noise that is absolutely convincing and corporeal. Even the warped music box-y cum Jarrett-on-Fender-Rhodes-with-Miles sound emerges some ten minutes in manages to work. Good stuff, want to hear more from this pair.

By Brian Olewnick
Just Outside